A device that regulates temperature by circulating a liquid, such as water or other fluids used as a coolant temperature of which is altered by the refrigerant cycle, is referred to as a chiller (cooling water circulation device). It is used for systems utilized for air conditioning in buildings and industries as well as to remove the heat generated by other devices.

While the water is being circulated through a cooling device, a chiller can continuously supply cooled water. It is frequently used as an appropriate tool to keep the temperature of heat-producing components and air-conditioning equipment such as laser processing and high-frequency heating devices constant, solves a variety of cooling issues, and can lower operating costs while increasing energy efficiency.

A recirculating chiller circulates a limited volume of water into a tank or device while keeping it at a specific temperature.

Chillers utilize a range of technologies for cooling. They can be broadly classified into thermoelectric (Peltier-based) and conventional cycle chillers.

Conventional chillers loop a refrigerant through a cycle, such as absorption refrigeration, compression cycle, or other refrigeration cycles, to cool down the refrigerant. Then it will absorb the heat of an external water tank that pumps the chilled water into the targeted device. These refrigeration cycles usually include compressors, condensers, and evaporators. They produce a considerable amount of noise, sound, and vibration, whereas they can be made for super-high cooling capacities.

Thermo-electric chillers use Peltier elements that directly convert electrical current to temperature difference. Thermo-electric chillers are light, compact, and include no turbo parts, so they need far less repair and maintenance, and they are silent. Still, they have some drawbacks: they cannot be manufactured for extremely large cooling capacities, and their efficiency is considerably lower than the conventional ones. 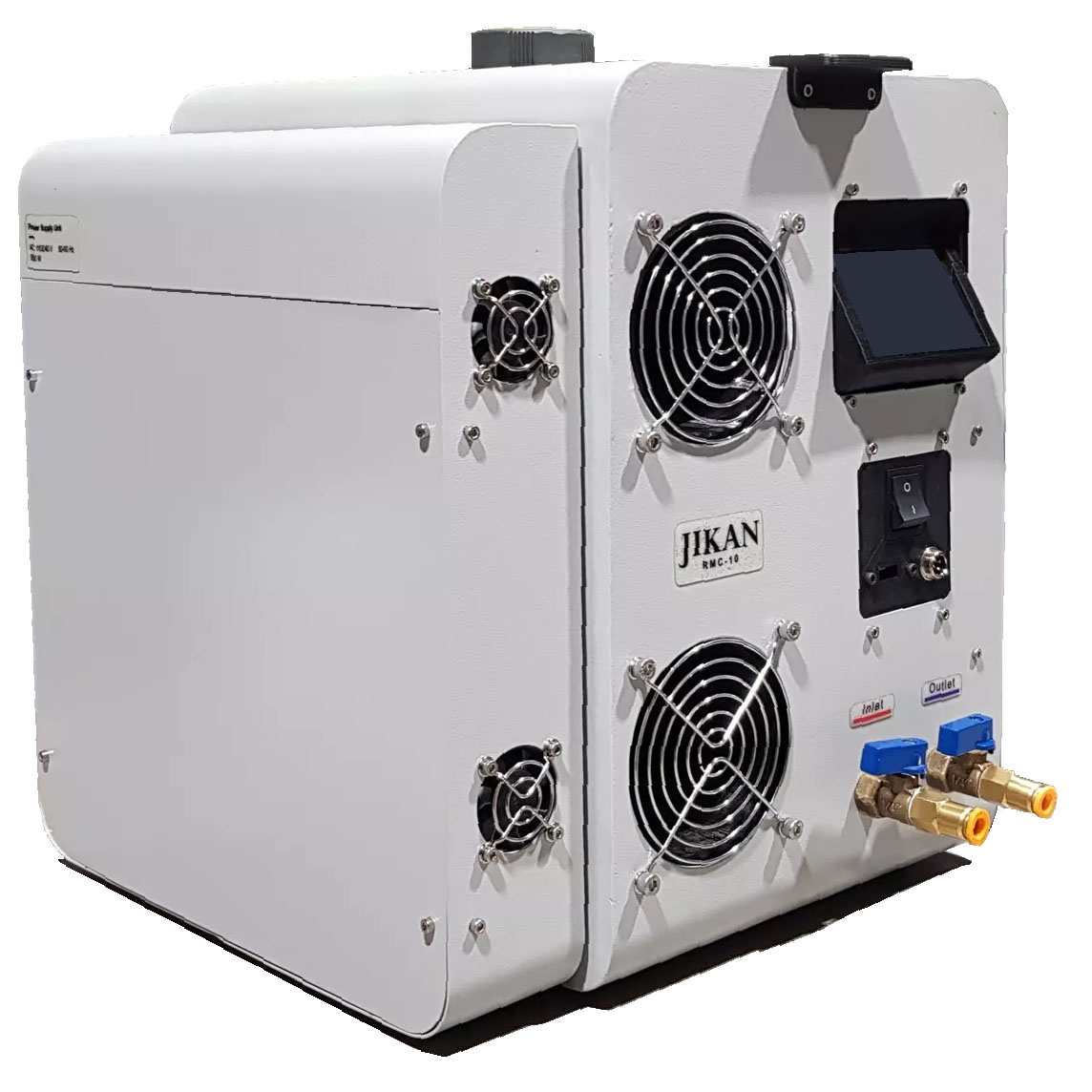 Peltier-Effect Basics and Uses in a Chiller

The Peltier effect is used in thermoelectric cooling to produce a heat flux at the intersection of two kinds of materials. A Peltier cooler, heater, or thermoelectric heat pump is a solid-state active heat pump that uses electricity, depending on the direction of the current, to transport heat from one side of the device to the other.

The highest temperature difference that can typically exist between a TEC’s (Thermoelectric cooling) hot and cold sides is known as ΔTmax, and it is typically around 50 -70°C.

Only when the Peltier element does not transmit any heat, which does not happen in practical cooling solutions, does the maximum value of ΔT occur. The actual ΔT has a negative slope and is a linear function of the power passed through the thermal element. The following graph illustrates such a function for a certain TEC. 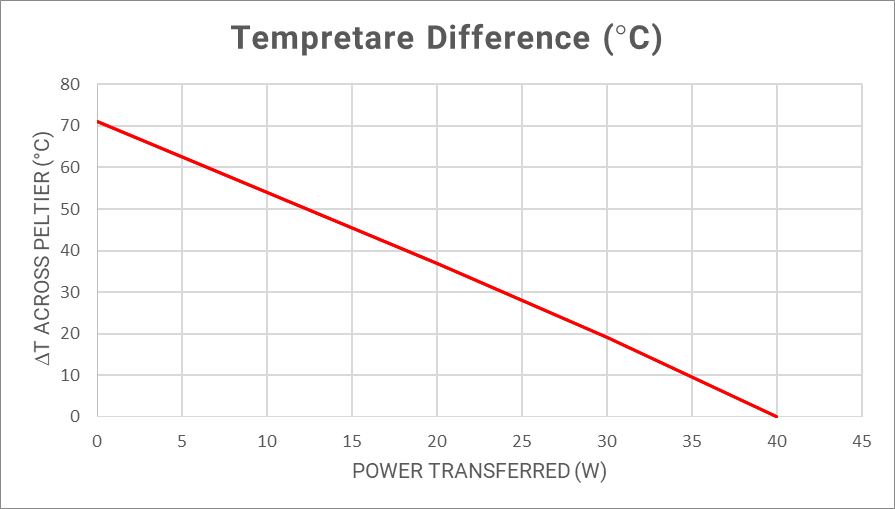 Looking at the graph, you can see that, for instance, if the Peltier element needs to transfer 10 Watts of electricity, the ΔT will be 55°C (in the form of heat). You will also see that ΔT eventually becomes zero in this example at 40 Watts. This happens when the TEC’s maximum thermal transfer capacity has been reached (Qmax). Therefore, the sample Peltier element is only capable of transferring 40 Watts.

Peltier elements not only transmit heat but also produce a lot of heat (and thus use considerable amounts of electricity). As a result, the heatsink will have to dissipate much more heat than it had to do previously, making it much hotter.

The Peltier effect phenomenon is the basis for how thermoelectric coolers operate. Heat is transferred from one metal into the other when two different metals are connected and a current is run between them. A thermopile, a long row of tiny metal cubes, is typically present in a thermoelectric cooler. The cooler’s cool end is inside, where it keeps the water chilled. Outside, where it emits heat into the atmosphere, is the hot end. Cooling is the primary use of the Peltier effect. The Peltier effect, however, can also be utilized to heat or regulate temperature. For this effect, it needs a DC voltage. 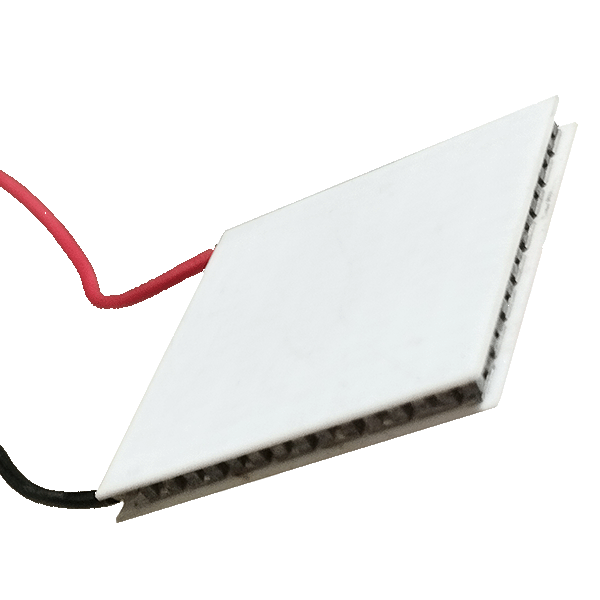 Elements of a Thermoelectric Cooler

Thermoelectric coolers function as solid-state heat pumps, and a series of alternating n-type and p-type semiconductors are present in each. Different types of semiconductors have intrinsic Peltier coefficients. Electrically connected in series and thermally connected in parallel, the array of elements is soldered between two ceramic plates. The highest performance for Peltier effect devices is from 180 to 400 K, and solid solutions of bismuth telluride, antimony telluride, and bismuth selenide can be manufactured in both n-type and p-type.

Peltier components come in a variety of shapes and styles. They typically consist of many thermocouples (for example, 127) sandwiched between two thin ceramic slabs in a rectangular arrangement. Although less frequent, multi-stage modules are also available to achieve greater delta T values.

When a current flows through one or more pairs of n-type to p-type elements, the temperature at the junction (“cool side”) drops, allowing heat from the surroundings to be absorbed. As a result of the transportation of electrons, heat is transferred between the elements and released on the opposite (“hot”) side as the electrons transition from a high- to a low-energy state.

Q = P (Peltier Coefficient). I (current). T (time) is the equation for the Peltier heat absorption.

When a current flows through one or more pairs of n-type to p-type elements, the temperature at the junction (“cool side”) drops, allowing heat from the surroundings to be absorbed. As a result of the transportation of electrons, heat is transferred between the elements and released on the opposite (“hot”) side as the electrons transition from a high- to a low-energy state.

Q = P (Peltier Coefficient). I (current). T (time) is the equation for the Peltier heat absorption.

Benefits of a Peltier-Type Chiller

Furthermore, coolers can significantly enhance systems regarding these following areas:

The most significant issues with Peltier cooling are high power consumption and high power dissipation, as was already discussed.

Thermocyclers are used in aerospace, laboratory, and other similar fields. These modules are perfect for use in space or other demanding environments since Thermocycler’s technology can survive harsh circumstances.

In biomedical contexts, thermocyclers are frequently used to amplify DNA and RNA materials using the polymerase chain reaction (PCR). By gradually changing the temperature of a block that contains the PCR reaction mixture, thermocyclers amplify DNA segments. Cyclers provide a dependable choice that can withstand over 500,000 temperature cycles. When it comes to meeting PCR standards for temperature homogeneity, reproducibility, accuracy, and speed, Peltier is a great choice. 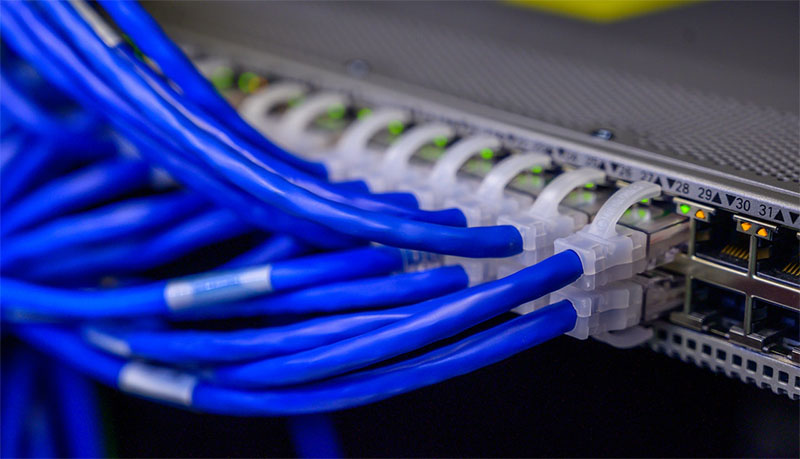 It is critical to match the functions, performance, and specifications of the chiller you choose with the usage circumstances and equipment status.

Choosing a chiller type is more complicated than choosing other equipment because, in addition to issues with the set temperature and amount of heat to be cooled, the lifting height of the piping connecting the cooled objects and chiller may fluctuate depending on its thickness, length, and shape.

You can choose a chiller after determining the cooling capacity of the cooling-required equipment and the pump’s capacity (water flow rate and outlet pressure). Considering the operating conditions while selecting a chiller out of all the available options using these described steps is crucial.

The operational temperature range for how much the chilled water chiller can cool down the intended object is determined by the cooling capacity. The chiller’s cooling capacity has a fixed value and is often stated in W (Watts). Since kcal/h makes the calculation more straightforward, we will use this unit to explain the topic here (1 kW = 860 kcal/h).

Keeping in mind that the object to be cooled may self-heat, and there may be a significant variation from room temperature, the following method is employed as a rough estimation of the cooling capacity.

In general, a chiller makes it easier to transfer the excessive heat from an inside environment to an outdoor one. This heat transfer mechanism depends on a refrigerant’s physical characteristics as it moves through the chilling system.